Sport management (SM) research does not occur in vacuum but in the context of a specific sport domain (e.g., professional sport, community sport, collegiate athletics), a specific country (or several countries), and, often, a specific sport (or several sports). It is produced by an authorship whose approach to and interpretation of SM research are underpinned by the socio-cultural milieu in which they work. As such, SM research requires a contextualized understanding of reality (Henry, 2007). An analysis of the geography of SM research offers both an additional lens to appreciate the status of knowledge production in the field and an opportunity to critically reflect on how relevant our research is to other studies within the growing academic field of SM. Furthermore, it alerts us of the potential for eurocentrism when, as is all too common, social science theories generated in the West are applied directly to other cultures (Henry, 2007).

We embarked on the analysis of the geography of SM research by coding each of the 149 empirical studies that the 10 top SM journals published in the second half of 2021, and not covered in issue 1 (2021). We categorized studies according to (1) the continent of the study context, (2) the continent of authorship affiliation, (3) the sport domain of the study context, and (4) the specific sport involved, if applicable. Two examples are presented to illustrate the coding protocol.

The first example is Toffoletti, Pegoraro, and Comeau’s study (2021) examining support for women’s sport as demonstrated by fans posting relevant images on Instagram during the 2015 FIFA Women’s World Cup in Canada. We coded the study as North America and as relating to the domain of sport events and the sport of soccer. The location of the authorship affiliation was coded as cross-continental: The three authors were affiliated with institutions in Australia (Oceania) and Canada (North America). We also created an additional code to denote the additional layer of the research context; we did this because the study examined media content situated in a sport domain as opposed to being a general sport media/communication study like many of those published by the two sport communication journals (i.e., Communication & Sport, International Journal of Sport Communication) we examined in this analysis.

The second example is a study by McSweeney, Hayhurst, Wilson, Bandoles, and Leung (2021) probing how bicycles-for-development social enterprises around the world foster gender equality. We coded the study as relating to the domain of sport-for-development programs in multiple continents (as the bicycles-for-development organizations examined were located in Uganda, Canada, Nicaragua, India, and South Africa) and specifically to cycling. Since the five authors were all from Canadian universities, the authorship affiliation was coded as North American. 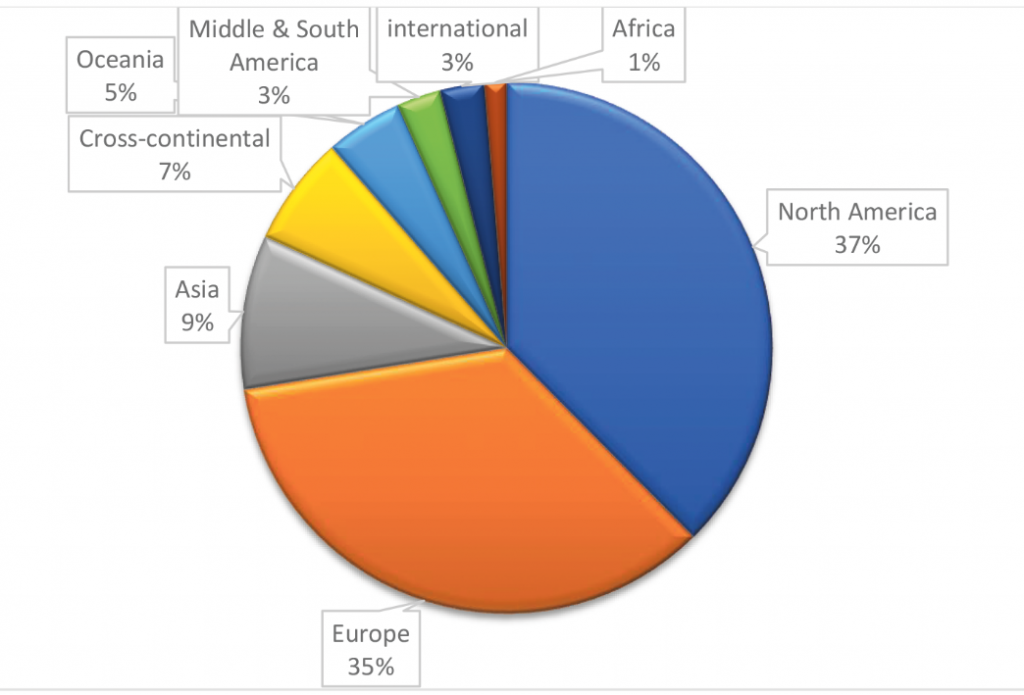 As shown in Figure 2, the results for authorship affiliation were similar to those for the studies’ geographical contexts in that the majority of the studies were produced by authors affiliated with institutions in North America (36%) and Europe (35%), and fewer authors were affiliated with Oceania (5%) and Asia (5%) (Figure 2). Notably, among the 27 studies (18%) with a cross-continental authorship affiliation, 20 studies had at least one researcher from a North American institution, and the corresponding numbers for European, Oceanian, Asian, Central and South American, and African institutions were 17, 10, 8, 2, and 1. Hence, although substantial cross-continental collaborative scholarship was achieved—an indication of somewhat diversified perspectives—researchers from Africa and Central and South America were mostly absent, reflecting the paucity of studies conducted in these two continents. 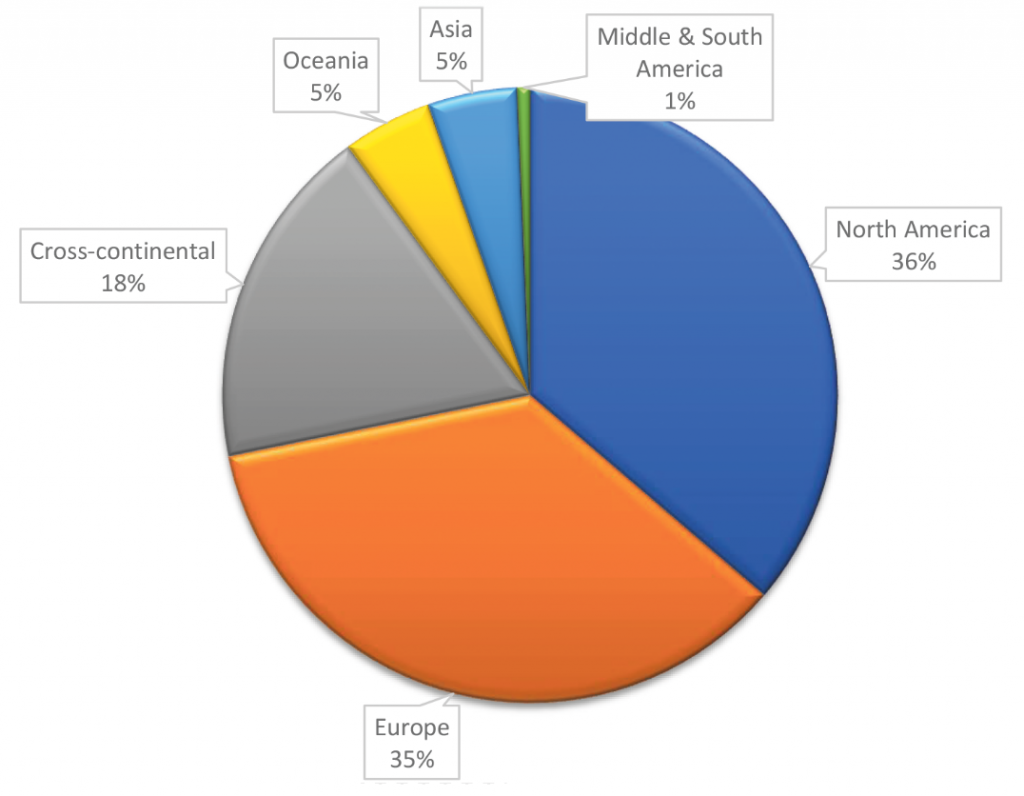 As shown in Figure 3, the 149 studies we examined related to various domains of study within sport. Professional sport topped the list, accounting for 37% of the studies; sport events (including sporting mega-events, major sporting events, and mass participatory sport events) accounted for 18%; community sport or sport for development programs accounted for 9%; and collegiate athletics, sport consumers/participants/sponsorship, and sport organizations (national and international organizations) accounted for 7% each. Notably, while 4% of the studies (6 out of 149) addressed sport media and communication directly, 11 studies examined media content (particularly social media) in a sport domain (mainly sporting mega-events, professional sport, and collegiate athletics) as shown in the study by Toffoletti et al., for example (2021). 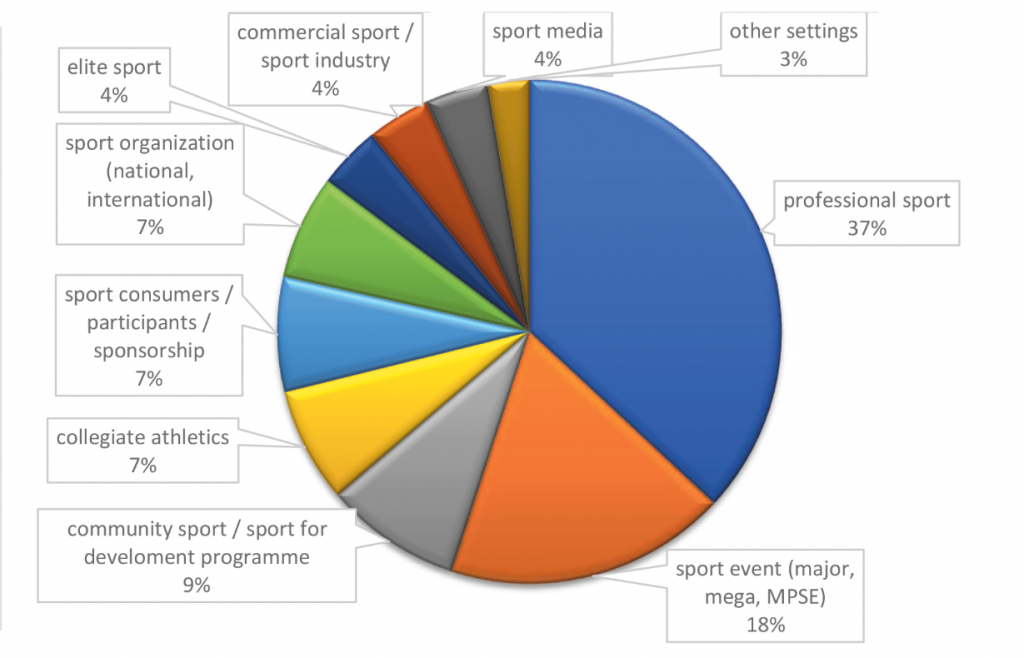 Of the specific sports associated with the studies, soccer accounted for the largest number of studies (21%), followed by the Olympics/Paralympics (12%), American football (7%), and basketball (5%). Furthermore, 36% of the studies involved multiple sports or referred to no specific sports (Figure 4).

Finally, we plotted the 149 studies on a world map according to their geographical settings (Figure 5), and the same information is presented in Table 1. As shown in Figure 5 and Table 1, North America and Europe clearly spawned the largest number of SM studies with the greatest variety of sport domains, followed by Asia and Oceania. Certain sport domains were more likely to appear in certain continents. For the 55 studies in a professional sport setting, 22 each were located in North America and Europe. Similarly, most of the studies (9 out of 11) in collegiate athletics happened in North America. By contrast, studies on sport events were relatively evenly distributed owing to the fact that the 2016 Olympic Games in Brazil and the 2018 Olympic Winter Games in South Korea provided the context for a number of these studies.

SM is a hybrid discipline combining sport and management, which also draws from multiple theories and scientific disciplines. In his Ziegler Lecture, Chalip (2006) outlined two models (or streams) of SM research: a derivative model that tests the boundary conditions of the mainstream management theories in sport and a sport-focused model that generates new theories grounded in sport phenomena. Whether for theory testing or theory generation, study context matters because it provides the site where SM theories are tested and the empirical materials through which they are developed. Although a sample of 149 SM studies from a six-month publication period is too limited to yield valid conclusions, ongoing scrutiny of the geography of SM research helps researchers to embrace diversity and sharpen cultural sensitivity in the testing and generation of SM theories, and this is imperative to the building of a distinctive SM discipline (Chalip, 2006; Henry, 2007).