Geography of sport management research in 2022

By using a coding protocol identical to that used in a previous Sport Management Digest (SMD) issue (see Xing, 2022), we coded 180 empirical articles to capture the geography of sport management (SM) research published in the first 6 months of 2022 by the 10 targeted journals 1. These articles were produced by authors based in 36 countries in 6 continents, and the contexts of the articles covered sport management issues in 53 countries across the 6 continents and pertaining to more than 45 sports (Olympics/Paralympics counted as one sport). In the analysis that follows, we address the following questions:

Geography of the SM research settings

SM researchers were brought together by shared concerns. As stated in the mission of the North American Society for Sport Management (NASSM), ‘…members of the Society are concerned about the theoretical and applied aspects of management theory and practice specifically related to sport, exercise, dance, and play, as these fields are pursued by all sectors of the population’ (NASSM, n.d.). Sport, an integral part of people’s lives, is staged and played in various forms ranging from professional sport, collegiate sport, and the numerous types of sport events to community sports and sport for development (SFD) programmes. Some of these are consumed via various media outlets. As such, the value of sport in society is co-constructed by its product or service providers (e.g. sport organisations and broadcasters) and consumers (e.g. participants and spectators). There are also stakeholders (e.g. sponsors and betting operators) that leverage sport to achieve their own organisational objectives while advancing the sport industry. We categorise these various sport offerings (i.e. products and services) and related stakeholders as domains of the SM study context that give rise to SM knowledge production. As in the previous SMD issue, this heuristic categorisation yielded 10 sport domains in the current study. As shown in Figure 1, professional sport accounted for the largest share (37%) of the 180 empirical articles examined, followed by sport events (15%), and sport consumers (12%). 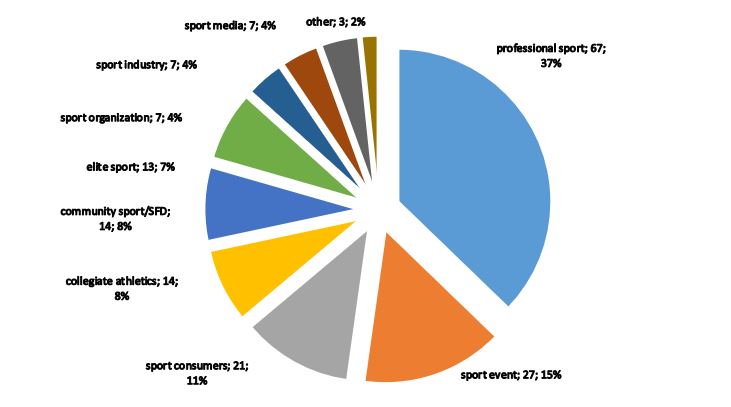 The specific sports associated with the continental contexts may serve as a lens to identify the locations of SM knowledge production. Our findings were similar to those in the previous SMD issue: First, soccer (18%) was the most popular sport in SM study settings, followed by American football (7%), basketball (7%), and Olympic and Paralympic sports (7%, see Figure 2). Second, 38% of articles were based on study contexts that either featured multiple sports (most often North American professional leagues encompassing American football, basketball, baseball, and ice hockey) or mentioned no specific sports. Third, there was a surge in the number of studies (4%) featuring e-sport, reflecting the rapidly increasing interest in e-sports worldwide. Meanwhile, mixed martial arts (MMA) was another nonconventional sport featured in 2% of the articles, expanding the scope of SM study contexts. Finally, although more than half of the articles were accounted for by a few sports (i.e. soccer, American football, basketball, and Olympic and Paralympic sports), over a dozen of the sports appeared only in the study context of one article each, accounting for 8% of all the articles. These sports included Canadian football, Australia football, ice hockey, horse racing, cricket, handball, gymnastics, athletics, swimming, taekwondo, free-diving, outdoor sports, fitness, and drag racing. The selection showcases the wide variety of sports that inform SM research.

Next, we investigated the distribution of specific sports across the geographical contexts. When the study contexts of the top seven sports were plotted against the continental contexts, the popularity of American football and baseball was noted to be confined to North America. Similarly, articles in the context of basketball and e-sport were based mainly in North America. In contrast, although articles with soccer-related contexts were based mainly in Europe, soccer was also a common setting in studies based in North American, Asian, and international contexts—reflecting the worldwide popularity of the sport. With the Olympic and Paralympic Games being hosted worldwide (except in Africa), studies associated with Olympic and Paralympic sports were most evenly distributed across continents. Finally, most of the studies related to running were based in Asia.

In cultural research, a distinction is made between emic and etic studies (Pike, 1967). Whereas emic studies have delineated meanings within a single culture (e.g. the Balinese cockfight, Geertz, 1973), etic studies have often compared differences along dimensions across cultures (e.g. Hofstede’s model of cultural dimensions, Hofstede, 2001). Although a foreign researcher can “go local” – a practice commonly applied in anthropology studies – a local researcher may be better equipped to grasp ideas or meanings within the study context that are locally relevant. Furthermore, a research team comprising both local and foreign researchers may identify and interpret findings relatively efficiently, with due prudence to both local idiosyncrasy and cross-cultural generalisability. Accordingly, we plotted the continental distribution of the study contexts against that of the authors’ institutional affiliations.

Given the large number of the included articles (n = 34; 19%) produced by cross-continental research teams, we further investigated the pattern of cross-continental collaborations. It was revealed that 50% (n = 17) of these articles were collaboratively produced by authors based in the Global North (e.g., North America, Europe, and Oceania). Moreover, 41% (n = 14) of the articles were produced by research teams with at least one author based in Asia along with other authors from the Global North. Finally, one article in the context of Central and South Americas was produced by a collaborative authorship from Brazil and the United States.

Sport is produced and consumed globally. Many professional leagues and sport events are global brands, which touch the lives of people worldwide. For instance, of the articles covered in this SMD issue, Dashti, Haynes, and Murad (2022) found that the local sport culture in Kuwait has been extensively affected by the English Premier League (EPL). In Kuwait, the EPL has shaped not only the soccer fandom lifestyle but also how Kuwaiti people have played and attended soccer games. Indeed, the ongoing globalisation of sport leagues and events has increasingly exhibited local variations. Tang, Schallhorn, Guo, and Coombs (2022) investigated viewership behaviour of the 2019 FIFA Women’s World Cup in China, Germany, and the United States. Their findings were analogous to Green and Houlihan’s (2001) observations on the increasing uniformity and diversity of cross-cultural sport systems in the domain of elite sport. In Tang et al.’s study, although 22 individual and structural factors all significantly predicted viewership behaviour across the three countries, significant mean differences were observed in most factors. Notably, patriotism exhibited the greatest variation, with Chinese fans reporting the highest level and German fans the lowest. As the authors discussed, the culture, traditions, and history of the countries and the evolution of their national sports may have undergirded such differences.

Because sport is both a global and local phenomenon, mapping the geography of SM research helps to inform our understanding of how SM knowledge is produced. On the basis of the analysis of the 180 articles in the current SMD issue, a few tentative conclusions can be drawn:

Pike, K. L. (1967). Language in relation to a unified theory of the structure of human behaviour. The Hague: Mouton.